Recap of our first week at Antikythera: on Wednesday, the team was completed with the last arrivals; diving operations manager Phil Short and chief diver Gemma Smith flew in via helicopter, and were warmly greeted. Thanks to our friends at Costa Navarino Resort for delivering essential personnel in such style! 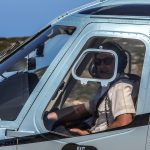 The Costa-Navarino helicopter pilot prepares for take off. 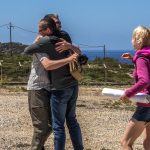 On Thursday, we conducted the first dive of the season on the Antikythera shipwreck site. We recovered artifacts we left positioned from last season, set the mooring lines and conducted a general site inspection which showed no evident interference. 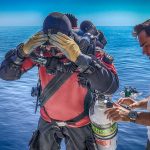 Brendan Foley is about to dive. Alexandros Sotiriou is assisting with final checks 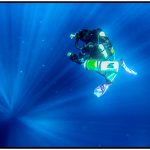 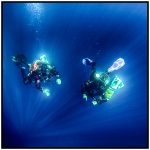 Brendan Foely and Gemma Smith descending towards the wreck site. 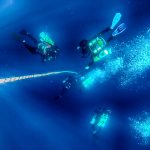 Divers heading towards the wreck site.

The good weather conditions from Friday and during the weekend allowed more dives and some targeted metal detection with a brand new device specially designed for the site. More to come, stay tuned!