In 1953 Captain Jacques-Yves Cousteau sailed from France to the Aegean in the famous ship Calypso. On board with him was MIT engineering professor Harold “Doc” Edgerton.  Doc had a new underwater strobe to test, financed by the National Geographic Society. The MIT Archives hold Doc’s letters to National Geographic President Dr. Gilbert Grosvenor, relating the team’s experiences. 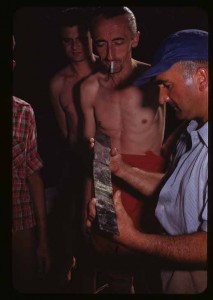 On 15 August, Calypso weighed anchored off Kythera and sailed to “Cerigotto”, the Venetian name for Antikythera.  On the morning of 16 August, Frederic Dumas and Cousteau dived on the wreck site. They noted the main artifact concentration at 55 m, and followed the debris trail to a depth of nearly 70 m. They and other Calypso divers ranged a quarter mile north and south from the wreck to see what else they could find. At a point about 500 feet  south, they located another ancient shipwreck. It was marked by amphoras sticking out of the sand at 42 m depth, with a lead anchor stock nearby. 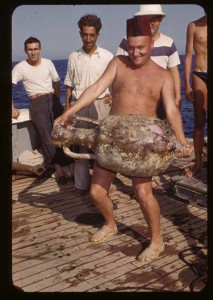 After surfacing, Dumas began rubbing his shoulder and arm, complaining of “diver’s bends”.  The symptoms were severe enough that despite taking aspirin and a sedative, Dumas was unable to sleep all night. As dawn broke, he went for another dive on the second wreck even though he couldn’t use his arm. At depth the pain eased and he swam delighted over the wreck’s enormous Roman amphoras. Back on Calypso afterwards, the pain returned with a vengeance. Dumas wrote in his memoir 30 Centuries Under the Sea, “my shoulder felt as if someone stuck a knife into it”; but eventually the pain diminished and after a few days disappeared entirely.

More drama awaited the team. During the night of 16 August, Doc Edgerton and his son tested the experimental underwater strobe and camera in the island’s harbor, Potamos. The flashes were visible from shore, and a concerned local alerted the island’s lone policeman. The policeman came aboard Calypso to protest, stating that he would inform the authorities in Athens. Edgerton related to Grosvenor, “There was no objection to above-water photos – but underwater, that was different!” Cousteau had obtained permission from the Greek government for all of their activities, but nevertheless, the police ordered the ship to leave the island immediately. 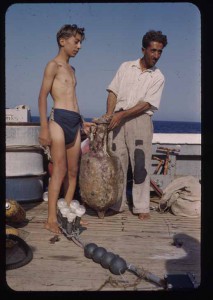 One of the large Roman amphoras recovered in 1953 by the Cousteau team from the second wreck at Antikythera. Courtesy MIT Museum, Harold Edgerton Archive

Calypso sailed to Piraeus and then on to Delos, but returned to Antikythera a week later. Again, Edgerton’s letters to Grosvenor provide details of their activities. He wrote that in the few days between visits to Antikythera, Cousteau had designed and built a water dredge so the team could remove sediment at the wreck site. Anchoring Calypso over the wreck allowed the divers to descend directly to it. In succession through the day, they stayed at 55 m for 8 minutes. Cousteau and his companions recovered a roof tile and a curious bronze strap. Dumas unearthed hull remains during his dive: wooden planks fastened together with treenails and bronze nails. After a long day of diving, the entire crew was tired by dinnertime. Cousteau ordered the ship away, and they made for Delphi.

Edgerton noted the team’s interest in continuing work on the wreck site. He wrote, “It will take much effort to find the art treasures at the Cerigotto wreck. However, both Cousteau and Dumas feel strongly that the sands cover the best pieces that were down in the hold of the ship. These objects were covered by sand first and therefore are protected from the worms and actions of of the sea.”