A tour of the Antikythera island by the diving team of the “Return to Antikythera” Project.

In some ways, Antikythera seems unchanged from historical accounts. The stone dwelling shown in the video (above) was inhabited within living memory. Very little land is under cultivation, and the island’s population of goats far exceeds that of people. Potamos village, nestled among the rocks edging the island’s only harbor, feels timeless. During the Cousteau team’s 1953 visit, author James Dugan sketched the island and its people  in his expedition logbook. Here are glimpses of post-war Antikythera. 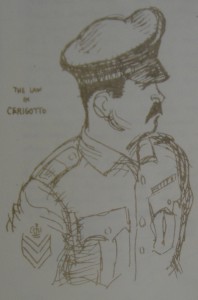 Another historical account of Antikythera and its environs paints a somewhat less welcoming portrait. In 1807 the Royal Navy ship NAUTILUS wrecked on breaking rocks west of Antikythera, ever since known as Nautilus Reef. Our first investigation of the reef came in 2012, when project teammate Alex Vallianos reported that he’d heard of cannons in the outcropping’s shallow water. We dived and found a wreck consisting of several naval guns, iron shot, and iron ballast. Subsequent archival research allowed us to identify the wreck (and determine why the reef is so named), bringing to light a survivor’s account and the Admiralty Court Martial proceedings. (Above) Two views of Nautilus Reef, one from Poretti islet (top) and the other (bottom) taken from about a mile north of the outcrop.

Royal Navy purser John Boone described the Antikytherans and their island after the NAUTILUS survivors were rescued by them. While his estimate of the island’s size is not accurate (the island is only about 7 miles long and 2 miles wide), his description of the inhabitants’ homes is reminiscent of the stone dwelling we visited:

We found Cerigotto, an island belonging to the dependency of Cerigo, inhabited by twelve or fourteen families of fishermen. It may be about fifteen miles long, and ten broad; its soil appears barren and uncultivated. The inhabitants are in the lowest state of poverty and wretchedness, their huts are built generally against the rock, and consist of one or two rooms on the same floor, the walls are clay and straw, and the roof is supported by a tree, which is placed in the centre of the dwelling; their food indicates extreme poverty, being a coarse kind of bread made from boiled pease and flour, this, with occasionally a bit of kid, was all the Greek fishermen, our deliverers, could offer us. They drink a strong liquor made from corn, the flavour of which is agreeable, and from its strength, our sailors drank it with great avidity….

The Greeks treated us with the greatest kindness, but were unable to assist us in the cure of our wounds, which were exceedingly painful; and which obliged us to tear up our shirts to bind them. We were aware we could not obtain medical assistance until we reached Cerigo, where we should find an English consul.

It was eleven days before we could accomplish this, as the Greeks were very timid, and, therefore, we found it difficult to persuade them to venture as far as Cerigo, a distance of five and twenty miles, in their frail barks. At length the wind proving fair, and the sea being remarkably smooth, we left Cerigotto, and at our departure the families of the fishermen were s0 affected by our distresses, that they shed tears of sympathy and regret. After about eight hours sail, we reached Cerigo, and were received with open arms.

The trip from Cerigotto (Antikythera) Island to Cerigo (Kythir) was interrupted by a stop at Nautilus Rocks that are only a few feet above sea level. Here our divers went into the water after we anchored on the lee side. Soon they were back with several spherical iron cannon balls, about five inches in diameter. Also a small lead spherical bullet flattened on one side. They reported several old cannon in the water. Apparently an old wooden ship foundered there and very little is left due to waves and tides.

A local legend says that the crew of a wrecked ship once landed here on Nautilus when their ship broke up. The crew ate the captain after hunger came upon them! When the crew was finally rescued, they were all crazy.

The local Antikytheran legend of NAUTILUS contained elements of truth. NAUTILUS’ crew spent six days marooned on the icy rocks in January 1807. Men drank seawater in a desperate attempt to slake their terrible thirst, and lapsed into raving madness. Storm waves washed men from their precarious toeholds and smashed bodies against jagged outcrops. Constantly wet, hypothermic, with no water or food, nearly half of the crew succumbed including Captain Palmer. John Boone reveals a truly horrible decision point after five days on the desolate rock, when survival dictated an irretrievable action:

Our hunger and thirst were now extreme; we knew that unfortunate men in our situation had been reduced to adopt means to relieve themselves, which, for a long time, disgust prevented us from resorting to; but when we considered these were the only means left us to preserve our lives, we thought we might in some measure be excused for adopting them: and we prepared for the mournful alternative, with the most awful sense of the dreadful necessity that had compelled us to adopt it. We selected a young man who had died the night before, and having offered our prayers to heaven for forgiveness, we tasted human flesh.

NAUTILUS wrecked about 4:30 a.m. on Monday, 5  January 1807. As the crew scrambled through the surf onto the rocks, the ship’s small whaleboat was able to get away with a few men. Under the command of Quartermaster and Coxswain George Smith, they rowed to Pori, a rocky islet about 6 miles north of the reef.  Smith’s testimony at the Court Martial later in the year tersely describes the events after the boat made it to Pori:

Between 12 and 1 in the night one of us discovered a light and we certainly thought some of the Nautilus’s men were on the rock. Finding the weather moderated very fast I ask’d who would volunteer to go down with me in the boat to see who was living. Four and myself went. When we found them very numerous telling them we could take 10 in the boat and no more. We took the pilot to talk the language. He came in the 5th person and desired I would not take in any more. We then pulled away to Cerigotto. The natives came down armed and much alarmed at seeing us. When the pilot went out and spoke to them they behaved with the greatest humanity, trying day after day to get the boat off the beach which was not accomplished till Saturday morning at 2 o’clock. We then returned to the rock at 10 or 11 o’clock and took the remainder of our people back to Cerigotto. I could perceive only 10 of our number that were likely to survive that night.

When NAUTILUS struck the reef, she carried 122 men. Six days later, the seas finally calmed enough for the Antikytheran fishermen to launch their boats and rescue the men still  huddled on the rocks. Ultimately, 64 survivors made landfall on Antikythera.

See also: this post with the local people from Antikythera

NARRATIVE OF THE LOSS OF HIS MAJESTY’S LATE SLOOP OF WAR, NAUTILUS, WRECKED IN JANUARY, 1807, ON A REEF OF ROCKS BETWEEN THE ISLANDS OF CERIGO AND CANDIA IN THE GRECIAN ARCHIPELAGO. BY THE LATE JOHN BOONE, PURSER IN HIS MAJESTY’S SERVICE, ONE OF THE SURVIVORS. DEVONPORT: PRINTED BY HOXLAND AND COLMAN, FORE-STREET, 1827

Minutes of the Proceedings of the Court Martial of Lieutenant Nesbitt and Others for the Loss of His Majesty’s Late Sloop Nautilus. CM 15 May 1807. ADM 1 – 5381