This project features the latest, most advanced submersible technologies. From robotic mapping systems, to closed circuit rebreathers and a new Atmospheric Diving System (the Exosuit), the Return to Antikythera seeks to maximize the scientific return from our days in the field. Even more importantly, the technologies selected for the project increase safety margins for our operations team. 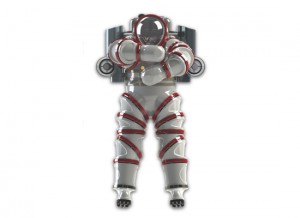 Video of REMUS 100 Autonomous Underwater Vehicle, deployed on our previous archaeological projects in the Aegean Sea.

During the 2014 and 2015 seasons, we used the SIRIUS AUV operated by by Dr. Oscar Pizzaro and Dr. Stefan Williams of the Australian Centre for Marine Robotics. The AUV’s stereocameras collected overlapping images of the shipwreck site. These data were processed using an algorithm known as Simultaneous Localization and Mapping (SLAM), to produce a three-dimensional pixel-resolution map of the wreck and the sea floor along the Antikythera coast.

For the 2012 project, our team’s goals were to re-locate the Antikythera Shipwreck and to document any other archaeological features around the entire island. Since the underwater slope near shore is too steep and rocky for effective sonar searches, we elected to survey the littoral visually. Closed circuit rebreathers gave us longer and safer bottom times than conventional SCUBA, and Diver Propulsion Vehicles increased our range immensely compared to finning. The result: a total circumnavigation of the island (34 km) in 8 operational days. Rebreathers and DPVs are now part of our team’s standard kit, and were used during the 2013, 2014, and 2015 seasons.

To add another dimension to the AUV map, our rebreather-equipped divers conduct surveys with underwater metal detectors. We now have more bottom time than any previous human visitors to the site, because we dive with mixed gas closed circuit rebreathers.  Each diver will spends more than 30 minutes of bottom time per day, and enjoys greater mental acuity and a larger safety margin than that of previous divers at Antikythera. 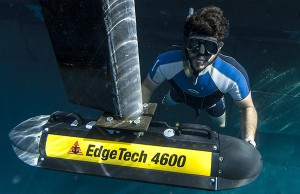 During the 2013 project, we deployed a combination side scan/multibeam sonar (pictured above), designed and operated by engineers from Edgetech. With this Edgetech 4600 sonar, we mapped the entire coastline of Antikythera out to a depth of 150 meters. The side scan data showed us tantalizing targets just 100 m offshore from the Antikythera Shipwreck. The data from this integrated sonar system are the basis for the first acoustic maps ever produced of the shipwreck and surrounding sea floor. With these maps and our direct observations by diving, our team has a better understanding of the wreck site and its layout.