Here are some of the artifacts recovered during the 2014-2016 expeditions and modeled with Autodesk’s ReMake software. Building a full list of Antikythera artifacts and a 3D virtual Museum of them will be an ongoing effort, in partnership with Autodesk.

The 2016.2 excavation season delivered our most important find yet: a mostly intact human skeleton. The bones include both femurs, radius and ulna from an arm, several ribs, and about 70% of the skull including upper jaw with teeth. More bones remain in situ, awaiting the next excavation season. We modeled the long bones in situ, and then both femurs together after recovery.

Bronze kline component
During the 1901 and 1976 interventions, the divers recovered several pieces of an ornate bed or couch, known as a kline. Elaborate bronze decorations embellished these frames. The artifact modeled here was recovered by our team in 2014, and matches those previously discovered like the artifact pictured below. Interestingly, a 1st century B.C. Roman bed currently exhibited in Switzerland’s Musee Romains Avenches bears a striking resemblance to the components recovered from the Antikythera Shipwreck. 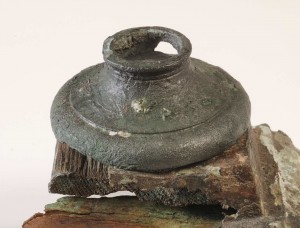 Despite the best efforts of conservation scientists, the 2014 artifact disintegrated soon after recovery. 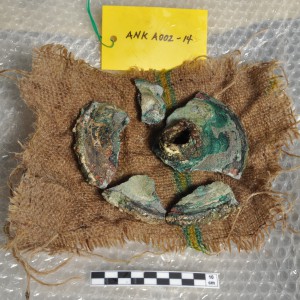 Fortunately, our accurate 3D models of the artifact saved it in virtual reality, allowing our partners at Autodesk to re-cast the artifact in bronze. 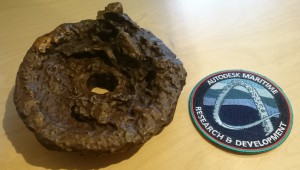 This small table jar was recovered in 2015, and is identical to a lagynos recovered by the Cousteau team in 1976. Ancient DNA analysis will be performed on both jars, to determine their original contents.

We recovered this rectangular rebated stone artifact in 2015, and believe it may be the base to a statuette. It has a series of holes perforating the bottom, and the rebate is filled with an undetermined substance. Tests will be conducted to identify all of the materials from which it was made, and the object will be X-rayed.

Our team 3D-modeled this demi-amphora while it was in situ.

Lagynos
This table jar, or lagynos, was recovered from the Antikythera Shipwreck in 2014. During the 1901 and 1976 interventions at the Shipwreck, 49 other lagynoi were recovered. Most were similar to this jug, which according to Westholm’s classification system is Type II with bi-conical body. Lagynoi are thought to have been wine containers, and it is possible they were shipped either as cargo on the Antikythera vessel or as provisions for the passengers. We will conduct ancient DNA investigations of this jar to determine its contents.

During the first and second 2016 excavation sessions, the team recovered two more intact lagynoi. We 3D modeled the  vessels and took aDNA swabs from both, per our norm. Here is the 3D model of the jar recovered in 2016.2 , ready for comparison with the 2014 jar.

Lead anchor stock
The lead anchor stock was first observed in 1976 during a dive with Jacques-Yves Cousteau’s submersible SOUCOUP. Our dive team re-discovered it in 2013, and recovered the artifact in 2014. Cast in solid lead, the upper margin of the stock contains a curious hollowed-out feature. It is likely that this held a wooden cross-piece during casting, which was part of the mechanical connection of the stock to the anchor shaft.

Bronze rigging ring
Recovered in 2014, this solid bronze rigging ring and attached eye-bolt is a component of the Antikythera ship itself. It was used to secure lines, or perhaps for the running rigging of the sails. The bolt is surrounded by remnants of wood from the ship.

The project team thanks Dr. Ageliki Simosi, Director of the Ephorate of Underwater Antiquities, for permission to share these 3D artifact images. And more thanks to Autodesk for the 3D modeling